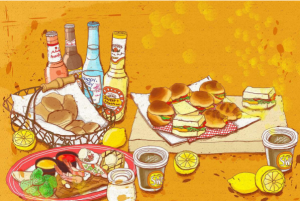 Social media has become one of the channels with the highest impact of advertisements in the last decade. This is primarily because of the widespread reach of the internet and social media tools through all locations.

Create attention among the people. The marketing communication strategy should be such that it is highly visible and capture immediate attention of the viewers.
The communication strategy should be relevant to the target market and arouse interest to meet the needs of the customers.
It should convince the customers to the extent that people want to try the new product or service.
The communication strategy should be simple, quick and make the customer confident to act on the information and go ahead to buy the product or service.
Because of the increase in the online traffic in social media sites every day, with millions of new users signing up, all organizations would only be at ease to reach out to more people and customers through social media communication. This platform would unlike other advertising mediums such as billboards, televisions etc. be a two way channel of communication instead of one. So it could also couple as a point of contact for grievance and complaint management, besides the promotional activities.

Also using the social media tools for marketing communication would make it more dynamic and real time, where pictures and videos of events happening presently can be shared immediately.

These are some of the advantages that all companies wish to reap by using such tools. MacDonald’s and Burger King are two such organizations which have started using social media communication strategies.

McDonald’s was started in 1940 as a barbeque joint in California. However later on it was changed into hamburger and fast-food catering stand. This was the first fast- food chain to use the principles of a production line in its stores. Over many decades the popularity of McDonald’s has grown and now it roughly serves around 68 million customers every day. It has its presence across 120 countries, and has almost 40,000 outlets throughout the world.

The Revenue generated by MacDonald’s is around $25 billion.

McD has a multinational strategy where it caters to the different culinary needs of different geographical regions based on the demographics and culture. It has a diverse menu across different locations using different ingredients suited to the particular locality.

Burger King was started in the year 1953 as a fast food and hamburger restaurant chain in Florida. The organization has changed hands quite a few times. Presently 3G Capital has a majority stake in Burger King.

Burger King essentially served only the America and Canada region until last decade where it expanded into more international countries for better opportunities.

Burger King has revenue of $ 4.1 billion.

The Offerings of Burger King were comparatively less and inflexible. However after the restructuring of the organization image by 3G Capital, Burger King made more adjustments in its offerings to cater to a wider target market.

Burger King in the 1970’s was at the peak of advertisements; however that lost focus in a decade.

Presently Burger King has around 15000 outlets throughout the world. Almost 47.5 % are in the USA itself.

Comparison of the two organizations.

McDonald’s and BK have had a different approach to reaching out to the target market and there is some difference that is also reflected in the social media platform communication strategies. Let us check these out in details.

McDonald’s has a different menu at different locations taking into consideration the culture and food habits of different areas. All such geographical locations are equally important. So essentially McDonald’s follows a global strategy. Burger King on the other focuses more on the USA outlets and tries to target the local audience more than the international market. As a result McDonald’s social media page will have more information regarding the store openings at various locations and pictures if various people at different locations enjoying their food. Burger King on the other hand focuses more on the promotion of new products. The page will contain more information about the features of new products and the price.
McDonald’s has a marketing communication strategy with a global identity and so it focuses more on the soft factors such as different people at different location enjoying their meal, different events where customers are participating. So there would be more content to make the customers involved. Burger King on the other hand plays more on the hard factors by describing the new taste and ingredients used and the reasonable prices.
Burger King Page also couples up as a customer complaint portal where people can state their grievance and the customer support team reaches out to them. However, since there are hardly any product features in the MacD page, there are fewer incidents of customer complaints in these pages.